La Pouzarenque (from the Occitan « pous » = well and « racar » = to return, to spit), in French « well to wheel » or noria.
The wheel well – or “bucket chain” – draws water not from a river or a canal, but, as its name suggests, from a well.
The mechanism consists of a horizontal wheel with an arm actuated by a man or an animal (donkey or mule) which turns around the wheel, on a track called a « merry-go-round ».
Sets of gears transmit the movement to a vertical wheel, equipped with a rope or bucket chain.
This descends to the bottom of the well, and the water is raised to the top of the wheel where it flows into a basin or small canal. The length of the chain is adapted to the desired lifting height.
The buckets, formerly made of wood or terracotta, are made of adjusted and welded zinc. Depending on the depth of draw, they can contain from 2 to 12 litres.
The frame that supports the machinery is made of cut stones called « weight stones », whose overall weight varies from 3 to 6 tons.
Pouzarenques, whose mechanism has been known since antiquity, seem to have appeared in our region, in the present form, in the 18th century, and they had their peak in the 19th century. 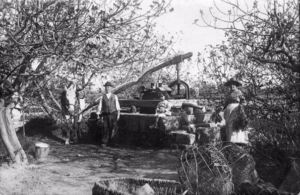 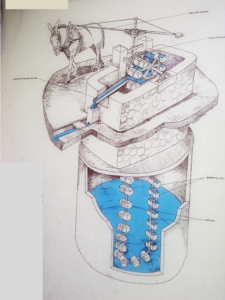